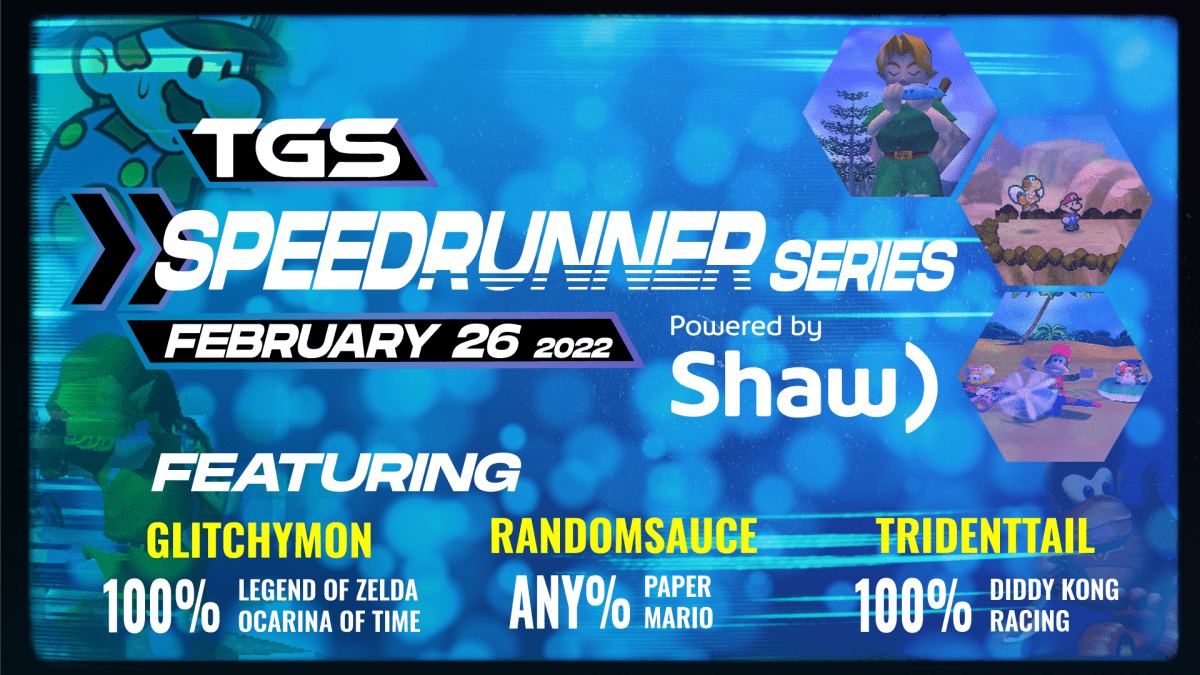 Join us on February 26th for the TGS Speedrunner Series, Powered by Shaw!

We’re proud to introduce the TGS Speedrunner Series, Powered by Shaw! This exciting event is split into three different parts, beginning with our showcase series on February 26th, which will feature three different titles and multiple record holders:

Glitchymon is a streamer, world-class Ocarina of Time speedrunner, and fellow Canadian who currently holds the world record for the 100% speedrun category. ZFG, a notable name in the Ocarina of Time community, had been the long-standing world-record holder from the era of 2013-2019, but was recently surpassed in December of 2019 when Glitchymon was able to achieve a world-record time of 3 hours, 51 minutes and 34 seconds. Since then, on October 23rd 2021, he has been able to improve his 100% time to an impressive 3 hours, 50 minutes, and 41 seconds. Needless to say, Glitchymon is our Canadian Zelda speedrun champion and will be completing the memorable Zelda title to 100% completion on February 26, 2022. He’s fast so don’t miss it! We’ll see you there!

We’re pleased to introduce RandomSauce as our Paper Mario speedrunner! Random has completed numerous glitched and glitchless Paper Mario speedruns and is currently ranked #2 for ANY% Paper Mario speedruns. He is also tied for #1 for ANY% (no Peach Warp), and #2 for all cards, and all bosses – he’s even discovered new tactics and strategies himself, which he shares on his Youtube channel. Without a doubt, we’re sure Random will satisfy your craving for speed as he sprints through Paper Mario. Please, take a chance to join him at the TGS Speedrunner Series showcase!

To add to our roster of speedrun champions, we have none other than the legendary TridentTail! Another fellow Canadian streamer & Diddy Kong Racing speedrunner currently holding the world record for the 100% AND Any% categories. When it comes to speed, TridentTail is unmatched. TridentTail makes Diddy Kong Racing (DKR) an otherworldly spectacle – blistering speeds, clever exploits, and high-octane technical gameplay are just some of the things you can come to expect as we watch TridentTail do what he does best – GO FAST! We’re thankful to TridentTail for joining us for our TGS Speedrunner Showcase! Be sure to check out the broadcast to witness his stellar speeds!

Tune into the action on our Twitch Channel! Plus, stay tuned for more information on the event and how you can get involved in the future and win prizes.