How to Play Aphelios 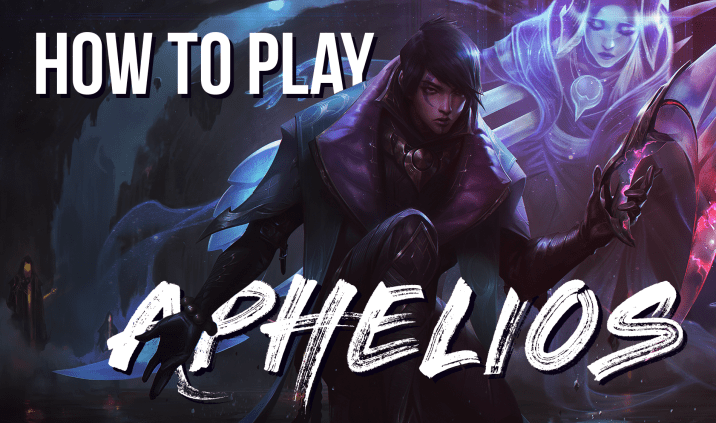 Note: This guide is no longer being updated and has not been updated for Season 11. !

Although Aphelios has been on the live servers for months now, players are still scratching their heads thinking “what exactly does he do?” In understanding Aphelios, we’ll be breaking his kit down into a few parts: overview (weapons, abilities, hud), gameplay, and combos. All of these elements are interconnected, but learning the basics are just as important, if not more, than learning his combos. Rioter Riotaether said it best:

“Learning to wield the Weapon of the Faithful demands discipline, focus, and mental acuity, so consider this primer your first test of faith along the path to mastering a champion with one of the highest skill ceilings in the game.“

The graphics breaking down his weapons, kit, and hub are all pulled from the official League of Legends post regarding his kit primer. This guide was made with the desire to condense his skills and weapons into one place. If you’re looking to master the champion, make sure to read the supplementary pages about him at these official pages:

Game on! Let us know how this guide as helped your gameplay/

Aphelios is a Marksman with five (5) different weapons. These weapons are a sniper rifle (Calibrum)

, and a close-range DPS boomerang (Crescendum)

. Each weapon has a unique auto-attack interaction, which can be present even when that weapon is in the off-hand spot.

In addition, each weapon also has it’s own individual active ability (Q). These abilities have built-in synergies with it’s other weapons, and each Q’s cool down is independent from each other. This means that you can Q with one ability, then swap weapons (W) and activate your Q again.

The Weapons of the Faithful Calibrum: This is your key to poke out your opponents, both early and late game. Equipping Calibrum gives you +100 range and gives you access to Moonlight. Calibrum feels especially nice when you are running the Press the Attack rune.

Severum: The scythe pistol is your key to surviving lane and close-quarter duels. Your auto attacks heal for 8%-25% of damage dealt, and can over-heal into a small shield that lasts for 30 seconds.

Gravitum: If you’re unable to get some form of CC from your support or teammates, this is your new best friend. Similar to Moonlight‘s mark, as long as an enemy is marked by Gravitums orbs, you can activate it outside your normal range. Auto-attacks will apply a 30% decaying slow for 3.5 seconds, and will mark its targets. This mark will indicate which targets will be effected by the Q.

Infernum: You want wave clear? We’ve got wave clear! All auto-attacks with this weapon will deal damage in a cone behind the targeted enemy. The primary target takes 110% damage, other enemies take 75% damage, and minions take 34% damage (if not targeted). This is fantastic in lane, and in applying constant pressure both in wave clear and in damage spread.

Crescendum: Crescendum has two different components: an innate quality and an arcing quality.

For its innate quality, the Crescendum acts as a boomerang– once you auto attack, the weapon lingers for about 0.25 seconds before returning back to Aphelios. He is unarmed during this time; however, the weapon returns to Aphelios faster the closer he is to his target.

His arcing quality comes into play while Crescendum is in the off-hand position, or when Crescendum is used in his ultimate. When Aphelios casts an ability that requires to throw this weapon, he’ll throw a spectral Chakram instead that returns back to him. He can hold up to 20 of these Chakrams at a time. These Chakrams act as bonus damage to basic attacks made with Crescendum, dealing 30 / X% AD (based on number of Chakrams) bonus physical damage.

Aphelios introduces a few new mechanics into the game that are organized within his own custom hud.

The most difficult part of this guide is over– now, we can get into the fun stuff. Combos are very important for Aphelios, and knowing his weapon synergies and planning your rotations in advance separates good Aphelios players from great ones. Note: All of his weapons synergize very well into each other at the moment, and there are many combinations that can work well. Here are my top 3 combos for different scenarios that you’ll experience in different phases of the game.

As much as it pains me to say it, it’s not always ideal to run Aphelios every single game. Although his base damage is insane, and even if you feed you do a lot of damage to champions, there are some match ups that just won’t work out. Make sure to look at your team and make sure you have enough set-up and peel to help make your life easier. Otherwise, Aphelios is a very squishy and immobile champion, and you may suffer greatly.

As Aphelios, you’re going to have a harder time against champions that can out-tempo you and lock you down in lane. Stay away from champions like Ashe, Leona, and Braum if you’re able to. It’s these tanky, CC-heavy champions that will give you the biggest headache in the game. Champs like Kog’maw and Twitch will also prove difficult if you’re not able to win your lane hard.

Aphelios is strong against squishy, low-mobility mage supports such as Soraka and Janna. I would argue that right now, your Aphelios will counter any ADC on the other team provided that you set the tempo for lane. This section may change as more information about ADC match-ups become available; however, passive lane ADCs like Vayne, Varus, and Ezreal should usually be favorable– if not equal.

For a live update on win-rates and match-ups, check out this site!

Aphelios feels good with a variety of different supports. The most success I’ve seen have been with champions that buff his damage while helping him sustain in lane (Yuumi, Nami). Mage supports like Lux and Brand are also great if you’re looking to dominate the lane phase and run away with the game. Any champion that can help him peel while providing some CC is always valuable.

tl;dr: Aphelios’ counters, and how well he does in lane, is strongly dependent on both team’s supports.

The initial order of his weapons were designed to assist Aphelios in the early game. The starting combo of Calibrum and Severum gives him both range to poke as well as life steal to sustain. I cannot stress enough how crucial the support picks are in this situation. Aphelios is very immobile, and he needs to set the tempo of the lane early on.

As for items, start out with your traditional Doran’s Blade and Health Potion, and rush for Essence Reaver. This item is necessary for any build path you might take on him because of the AD, Crit, CDR, and passive mana sustain. It’s an overall great item, and it’s necessary when you begin to optimize his Q. You’ll experience his first damage spike with this purchase.

Speaking of power spikes, your level 2 power spike is huge. Because of the nature of the champion, he does not learn his Q ability until level 2. Once this happens, you’ll have access to both the Moonlight and Precision Onslaught. Try to push the wave to get to level 2 before your enemy does, and use that power difference to activate both Q’s in succession of each other.

Here’s the best way to pull off this engage: 1) have the support target either the ADC or the healing support; 2) engage with your Precision Onslaught, and use the bonus auto-attack thanks to Calibrum‘s mark; 3) switch weapons with your W so Calibrum is your main-hand weapon; 4) activate Moonlight to finish off your opponent as they try to run away. Don’t feel the need to rush this combo if they continue to stay in melee range– utilize the life steal of your Severum to keep the dueling advantage.

Aphelios, although very strong, is very squishy and very immobile. Your combos will be important (see below), but you positioning is even more important. In fortunate situations, your Aphelios gameplay will have carried you through your laning phase, and your lane domination has set you up in an ideal hyper-carry situation. Other times, it’ll feel like you’re missing out on a ton of DPS while feeling very vulnerable. In either situation, playing smart and building optimally are your best friends.

Aphelios’ extra stat maxing should follow this order: AD > AS> Bonus Armor Penetration.  While this is the most optimal way to max his stats, it’s not uncommon to take a point of Bonus Armor Pen when dealing with a very tanky team (especially in the laning phase). Any more than the one before Level 9 may be detrimental to his damage spikes.

These should be your main three (+ boots) items, unless you’re looking to do a hybrid on-hit build. Throw in a Rapid Firecannon to increase your range and extend the threat of your poke and root. You can see a full break-down of all of his item possibilities, including a Manamune and BORK on-hit build, at our Mobafire guide!

Naturally, Aphelios has a lot of weapon combinations. While there are a ton of different combos out in the world, here are a handful of combos that I find to be the best. iiGazeii did a great job of putting together a list of combos on this League forum, so if you’re interested in seeing all the possible combinations, check it out here! Otherwise, here’s some of Aphelios’ strongest weapon combos.

This is the highest damage-output combo you can do. The AOE from Infernum‘s Q ability will tend to give you the most of Crescendum‘s bonus Chakras. Swapping from Infernum’s Q to auto-attacking at close range with Crescendum + the bonus Chakras gives you an insane amount of damage.

As mentioned before, activating Severum‘s Q grants +20% movement speed and unleashes a fury of attacks from both weapons for 1.75 seconds. Every target hit by this Q will also get marked by Calibrum, which grants an additional attack with no range restriction. Utilizing short trades is ideal with this combo, and it will keep you safe with the range from Calibrum as well as the sustain from Severum.

This is the combo you want to take if you want to run down an opponent without taking any damage (thanks to Severum‘s lifesteal). This is a great combination for dueling your opponents. To add some extra sustain, drop Crescendum‘s Sentry to get some extra life steal before starting off the fight.

Our sole Gravitum combo for this list! This combo is great for setting up engages from a distance. Moonlight applies the Gravitum mark, allowing for your teammate to follow up Eclipse‘s root. These two are fairly safe picks in general, with Calibrum’s range keeping you safe and in the back-line while providing Gravitum as a means of peeling for yourself. While this isn’t a game-breaking combo, it’s reliable and secure.

Congrats for making it this far! Aphelios is a complicated champion with a very high skill ceiling, but feels fantastic once you get to know how he works. If you’re interested in seeing Aphelios’ optimal runes, builds, etc, make sure to check out our Mobafire guide!